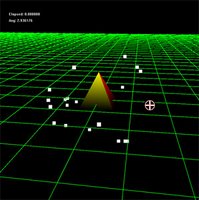 I haven't been coding as much as I would like but I've got a bit done. I've also submitted a request to be moved to the early shift so I can get more coding done. Here is what's been added.

Its always annoying trying to explain to people who don't code that progress is being made when nothing changes with the pretty pictures. That's why I randomly chose that the zombie draws itself as a triangle. On that note however suppose I could throw in some 3ds models, the code is there, but I think I should focus on the code.

Oh well to work I shall plod.