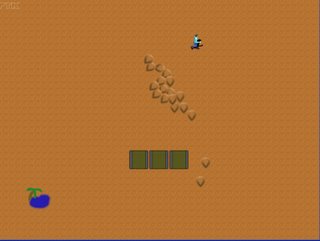 Basic collision detection setup. Still a bit to buggy. Might need to put some kind of turning curve on the worms. Also looking at stopping them flocking but move in the same direction slightly. Going to centre them on hives. Also will make a scrolling map to increase play space.

Spent a good 2 hours on sprites. Running man is still a holder. But I've been fighting to get the worms, just right. Still not happy.

Wish I had gone 3d. Then it would be a simple matter of protruding the landscape. Also models are easier than sprites, even sprites made from models. Also would have looked better.

DAMN ALL SPRITES TO HELL!!!