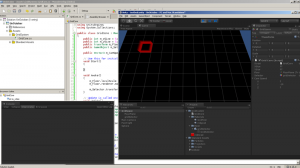 So POV declared The October Challenge : Make a game in a month and sell it.
New Grid system for Game

The game is relatively simple and based in the Channels of Power world using some ideas from the MMO I was making. The idea is I will use Google App Engine as a backend and Unity as a front end.

Setting up a Defence

First a player is given a limited budget to setup the corporate defences on a location. They will also need to script and issue orders. They are contractor to be brought in to setup the defences. It is then saved on the server.

Then using a limited budget an attacker equips a team and selects a mission from the server. Then using X-Com turn based style combat they must break through the defences.

The moment the defences are breached that replay is saved for the viewing of the defender. Reputation is built up for how many assaults a map can take. Offensive reputation for breaking assaults with minimal failures. This is of course weighted and balanced, and persistent.

For the challenge I'm keeping it very very feature light. The plan is to sell pre-order copies at the end of the month if I feel the project is going well and then continue development. Much as many other indie games are doing.

In terms of DRM and platform. I'm going to be releasing PC version with possibility for future platforms. The DRM is online-always account based system. So basically the client is DRM free so to speak and can be installed multiple times but your account is persistent and can only be logged in at one machine. The online is needed to play the game.

I have an idea on how to relaunch the podcast but I'm having trouble getting audio equipment together. Please bear with me on that count.