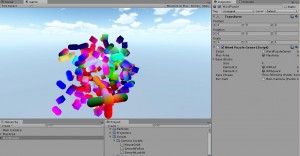 Puzzle Scrambling itself with easy Physics

So this weekend the theme was Discovery which really inspired me. The plan was simple.

Build a 3D Spatial Puzzle based on a secret phrase. The phrase is revealed when the person completes the puzzle.

The idea is you could share secrets or even send messages to people in a playful fashion. I really like the concept.

The CB2 Jam was amazing! Really helped and I would have given up much sooner without it. A great atmosphere and a brilliant lot. So plan to make plans for any Jam that is planned at CB2. Also my first real location based jam. That wasn't just with house-mates or at Uni/school.

Also thanks to CB2 to being so accommodating.

I'm forcing myself to use Unity3D at the moment because of work. It's not my preferred package but its very powerful but its annoying to have to learn things on the LD weekend. A key thing you shouldn't be doing.

The rest were minor niggles but thanks to the Jam I was helped out a lot with those.

I plan to finish this before the new year, make it sparkely and easy to share phrases via the web. Also to greatly improve the random generation.

SSHeart: Secrets in the Space of my Heart